In remembrance of co-operators in WW1 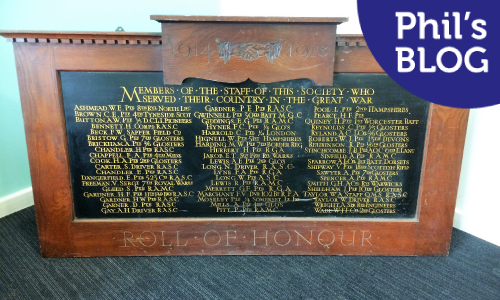 The centenary of the end of The First World War or The Great War commemorates the end of the bloodiest conflict in this country's history. So I am dedicating my whole blog this week to all those co-operators who fought and died during the First World War. 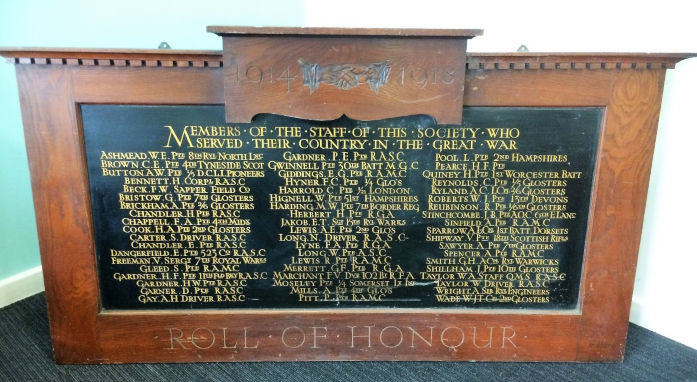 The area covered by the Roll of Honour does not equate to our current trading area but includes Gloucestershire, Worcestershire and Warwickshire. If you look at the entries on the memorial the first thing that strikes you is the number of different regiments or battalions they served in. Men generally served in their local regiment but if they had family connections to other parts of the country they often signed up with them. So as well as those joining close to home like the Gloster’s, Worcester and the Royal Warwickshire Regiments there are others listed from further afield including London, the Devon’s, North Lincolnshire and the Scottish Rifles.

Ranks and theatres of war

When it comes to rank most of the men commemorated were Privates (Pte - soldiers) or Sappers (Spr- engineers), the lowest ranking in the army. However, there were also Sergeants (Sergt, Sgt), Lance Corporals (LCpl), one Acting Corporal (ACpl) and one Corporal (Corpl) who would have been in charge of the men fighting at the front.

The men commemorated on the plaque served throughout the different theatres of war across the British Empire and the world. For example the Gloucestershire Regiment, commonly referred to as the Glosters, were made up of 16 battalions who saw active service in France, Italy, Egypt, Mesopotamia (today Iran, Iraq, Syria, Lebanon, Israel and Jordan)  and Salonika (today the Balkans). The 12 men on our Roll of Honour were part of a total of 8,100 men killed from the regiment. Between them the regiment won 72 different battle honours including 4 awards of the Victoria Cross.

If you look on the Roll of Honour they were all drivers for the R.A.S.C. or the Royal Army Service Corps. The R.A.S.C. was responsible for supporting the troops at the front line including providing them with food, water, fuel and clothing. All would have been drivers for us before the war and would have been attracted to the role with posters like this, emphasising the high rate of pay of 6 shillings a day (in comparison a privates basic pay was 1-2 shillings a day). 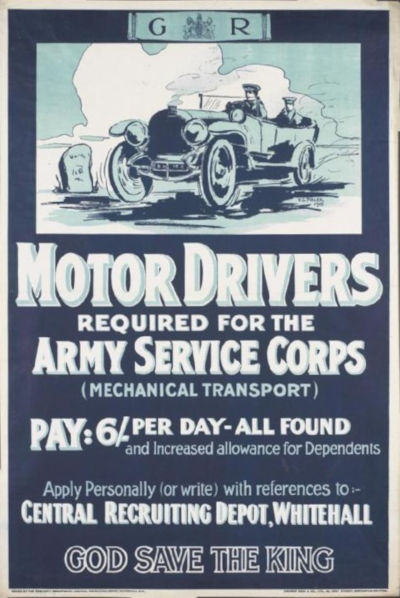 The reality was far from the jaunt implied on the poster. It was a uniquely dangerous job as the men had to drive along potholed and muddy roads littered with unexploded shells often under heavy fire. They were an easy target for the German guns who picked them off as they approached the trenches. Consequently they had a very high casualty rate and uniquely among service staff they were considered to be front line combatants. As a result of their bravery the corps received the "Royal" prefix for its service after the war.

At the time of the Great War there were dozens of Societies operating across our trading area all of whom actively encouraged their colleagues to sign up despite the impact on the business. Unlike most employers all our Societies paid colleagues their full wages when they were on active service, minus government war contributions. At the start of the war Societies also paid three months wages to widows until the government legislated to support them.

You can find out more about other co-operators who fought in the First World War in a very good article by Anca Voinea in this month’s Coop News www.thenews.coop

Could you help find out more?

To find out more about our Roll of Honour I would like to offer any colleague who is interested the opportunity to research the individual’s men’s war records. This will require online research and a visit to the National Archives at Kew. We will then use this information to put together an interpretation board which we will put up next to the Roll of Honour.

If you would be interested in taking up this opportunity please email our Communications Team stating why you’d like to research the Roll of Honour.

What we are doing to commemorate Armistice Day?

To commemorate all those co-operators who served during the First World War Midcounties will be holding a number of events throughout our trading area in the run up to Sunday November 11th. 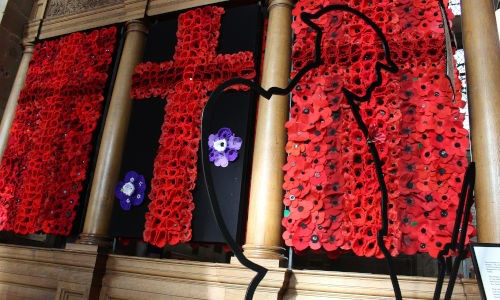 Very interesting, it's so good to see the poppy sellers in our stores getting a warm welcome and support from the colleagues within.

My grandfather fought in WW1. He ran away from Ireland when he was 14 & made up his surname & a fake age and joined the British army aged 15. On the beaches of Gallipoli he was shot in the leg & laid under dead soldiers for 3 days. He was found barely alive and taken to Malta. His leg was amputated & he was medically discharged without a pension. My own son now a Soldier in the PWRR Regiment. I am so proud of him. I pray he will never be called to theatre or see war in his lifetime.

That poster makes the job look very glamorous, reality was so different.

So pleased we are doing so much as a Society to mark the occasion. Very interesting read that reminds us all of the sacrifices made by so many and the reasons why we should never forget.

Really interesting to read and very poignant, so many young men and women gave their lives. Their sacrifice changed the world so we have been able to have ours. Fitting we mark the armistice centenary with the respect it deserves #lestweforget18

Activity across the Society as we respond to the crisis

Talking With Colleagues About Coronavirus