Have you ever seen the iconic rainbow flag 🌈 anywhere? If you didn't know, it's the symbol of LGBT+ and every February is the historical celebration of the movement taking place.

A month-long observance of lesbian, gay, bisexual and transgender (LGBT) history, the month also includes the history of the gay rights and related civil rights movements over the years. Founded in 1994 by Missouri high-school history teacher Rodney Wilson. LGBT+ History Month provides role models, builds community, and represents a civil rights statement about the contributions of the LGBTQ+ community.

How can I raise awareness amongst my team?

Why not print off the voices and visibility wallchart and display in your colleague areas. The Wallchart has been produced by the Forum for Sexual Orientation and Gender Identity Equality in Further and Higher Education by a group of trade unions in association with Lesbian, Gay, Bisexual and Trans (LGBT+) History Month.

The aim has been to produce a resource that supports those raising awareness of sexual orientation and gender identity, equality and diversity.

Centred on the United Kingdom, it highlights important legal milestones and identifies visible and significant contributions made by individuals, groups and particularly the labour movement. 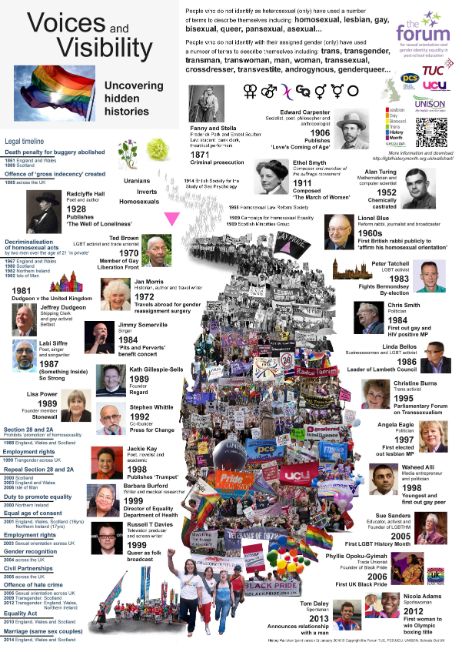 The LGBT+ community is made up of people with various identities. Below are some definitions with the sexualities and gender identities that explain a few statements, can you name them?

Take the Quiz! Do you know the Definitions of LGBT+? Answers below...

British LGBT+ Sportspeople - Did you know?

- Don't forget to print off the wallchart here and display in your site.

- For you quizmasters, take part in the short quiz above to learn about LGBT+ and help raise awareness during history month.

Loving this article, its great to see LGBTQ content and helps those who may not identify / not an ally, or may not know much about us or the history, learn more about the community :)

Interesting read, a big thumbs up from me :-)

This is really great content! Thank you for acknowledging the LGBTQ+ movement. A great way to further equality!